People Say We Monkey Around

What do you do when you get so incredibly busy over the weekend that you forget to post? You do a follow-up post from the week before!

As you may (or may not) know, last week's post was about my MPC Monkeemobile model. In it, I mentioned wanting my old Corgi Monkeymobile back. As it turns out, I completely forgot that I have yet another Monkeymobile from another company! 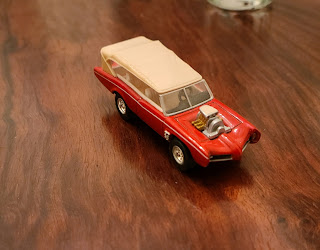 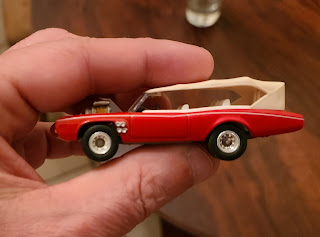 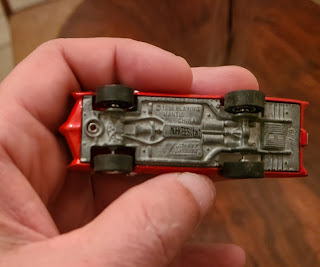 Yes, in the late 90's Playing Mantis came out with this one! It's actually very well done. Note the pinstriping down the side and the detailed engine and chassis. The only thing missing is the Monkees logo on the side, and this tells us that this particular car is a second run.

You see, Playing Mantis got the rights to the car, but NOT the logo. This was only discovered after the first run went out, so there are cars with the logo, but they are tougher to find. I found this one at KB Toys on the rack, so it wasn't tough at all.

Well, there you have it. I really like this little car. Maybe someday I'll put in the effort to go to eBay and see if I can get a logo version...or not.

Greetings from the Attic! This week we have a blast from my childhood (that I built as an adult). The Monkeemobile! First, settle back, class, and listen to a little history... (insert wavey lines across screen)

In 1966 the producers of a new show called The Monkees approached Dean Jefferies about building a car. The show was about a band made up of young people who may or may not have seemed remarkably like The Beatles.

Anyhoo, Jefferies knew someone at Pontiac, and a deal was struck  the Monkeymobile would be a (very) stretched 1966 GTO convertable, tricked out with the drag strip in mind. The original had a supercharged 389 with a 4 barrel carb (that's car talk for lots and lots of power). However, it proved difficult to drive, so a fake supercharger was added.

There were originally two cars built. One was for on camera and one was for touring. Jefferies was working for MPC at the time, so they got exclusive rights for the plastic model. That's where I come in.

This is my MPC Monkeemobile that I (more or less) carefully built in a fit of nostalgia. Here she is! 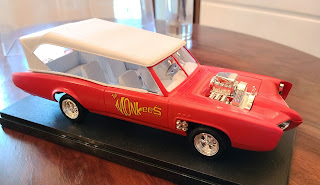 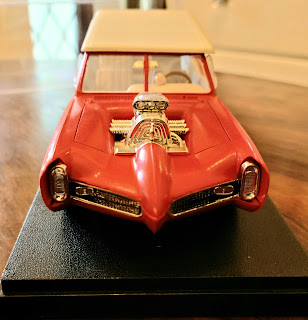 The nose was sharpened considerably. 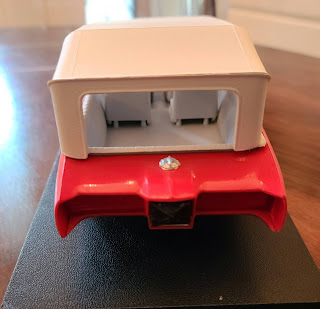 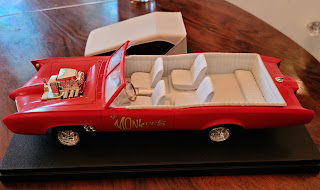 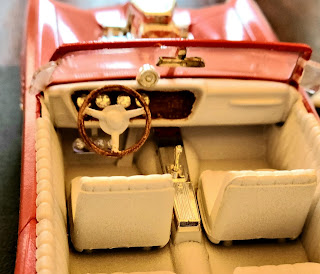 The details of the interior. I didn't do great, but at least I tried!

The underside is pretty detailed...

I keep it in a plastic case to scare off any pesky dust. So far, it's done pretty well.

It was a fun project! Someday I might replace my Corgi Monkeemobile from my childhood... Stay tuned!

This week we have an item that was given to me by my daughter, a Panasonic Dymamite 8 Track Player! Here it is: 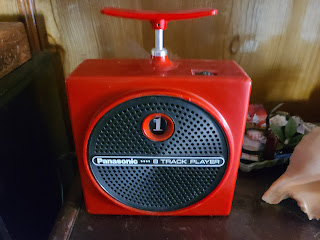 Mine is Detonator Red (the most popular color). It also came in Bomb Blue and Explosion Yellow. Actually, I've read that it also came in white and clear, but I haven't seen them.

This player came out in 1974, and was an instant hit. There were really only two controls, a volume dial and the plunger track changer. Mine works well and sounds pretty good. What I found intresting (and something I didn't notice for quite a while) is that it only plays mono. That makes perfect sense when you think about it. It only has one speaker!

As I mentioned my daughter, Jessica and son-in-law Josh  gifted it to me a few years ago. She knows I like to collect various music reproduction items. I sometimes brag that if it was recorded, I can play it!

She found it in a second hand store. Although I never owned one as a kid, I really like it. I very recently looked up sold examples on eBay and by golly I like it even more! Working examples are going for about 250.00! Now I know she didn't pay anything close to that, so she must have gotten a killer deal.

Needless to say, I'll never sell it. One doesn't sell a gift, especially a really cool one!

Until next time, keep searching for treasure! (and train your kid to also!)

In 1970 a new line of Hot Wheels debuted, The Spoilers. This series of cars is pretty easy to identify since most have exposed engines, and...well...spoilers. They are actually a retooling of the 1968 line of "Custom" cars, which were lightly modified street vehicles. These care are generally quite sought after by collectors because they are very nice examples of the muscle cars they represent. One of the most popular "Spoilers" is the Boss Hoss Ford Mustang that was released in 1971. Here are my examples: 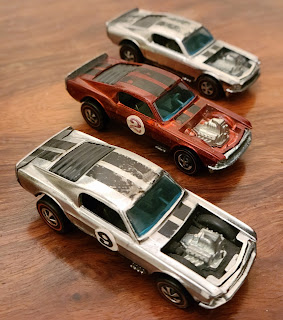 What? (you may ask yourself) I thought you said it came out in 1971! What gives?

Well, as it turns out, the Hot Wheels Club gives (or gave, anyway). You see, you could mail off to join the Hot Wheels Club and you got a really cool chrome car in your kit. You didn't know what car you were getting (there were three different ones) but one of the possibilities was the Boss Hoss, which you could NOT buy in a store!

In the picture above we have (from front to back) 1. My first Boss Hoss Club Car, 2. My standard 1971 Boss Hoss, and 3. Another Club Car that I bought because it was pretty cheap. Which brings us to an interesting fact. Even though the Club Cars were regarded as a special release, and came out one year before the standard release, they really don't command any extra money. In fact, it sometimes seems that you can find chrome Club Cars for less that the standard release. The most sought after car is the "over chrome" model. These are Club Cars that were not used, so they simply sprayed over the chrome with spectraflame paint.

In all honesty though, I do like the Club Cars a bit more. I can only imagine being a kid and opening up my long waited for Club box and finding a car that none of my friends could even buy! Now THAT would be treasure!

Speaking of which, until next time, keep searching for treasure!