Come Out To Socialize

Well, I have run out of vintage Disneyland games, but a comment from Melissa reminded me that I'm not quite finished. You see, she suggested a Disneyland version of Clue (which I think is brilliant). Now even though that might not exist, I do have this Clue... 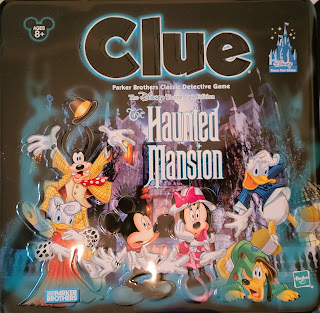 Yes, the tin box version of Haunted Mansion Clue! I have had it for quite a while and have played it many times. Still, I thought you might not have seen it in any detail (and I needed a subject for a post), so here goes!

Each side of the tin has a different character. Of course we start with the Big Cheese...

Next we have the Bride. Notice that this is NOT the silly Constance who has now rudely invaded the Mansion. This is our beloved Beating Heart Bride.

Minnie is hanging out on the side opposite of Mickey.

And the Mariner is opposite the Bride. 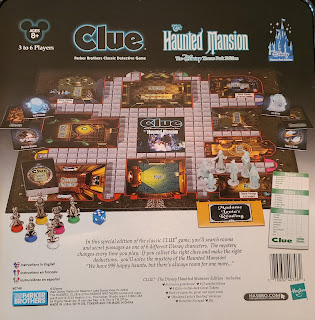 The bottom of the tin shows the board and game pieces. 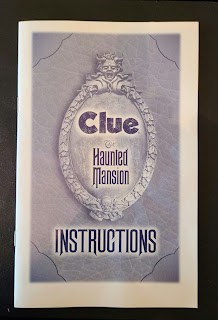 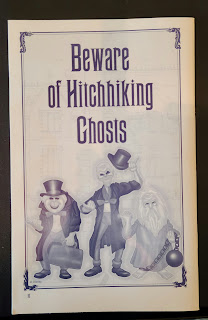 The back of the instructions features these disreputable fellows. 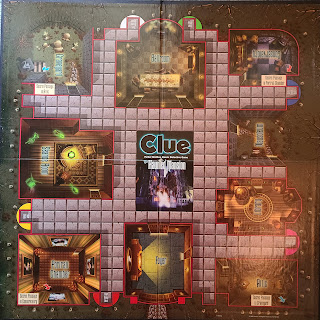 Here is the actual game board. It is double fold type (folds into 1/4 its size) that I really don't care for. The board never really wants to stay completely flat. Still, it has nice graphics and its kind of neat to see how they used the actual Mansion areas. 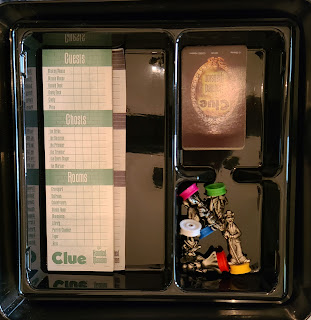 The tin has a double tray. This is the top tray. 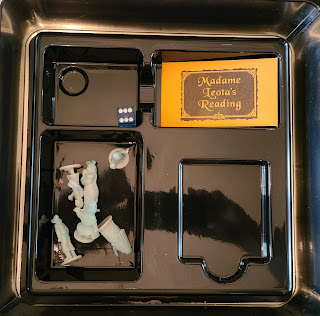 And this is the bottom tray... This is a very quick setup of my board. I like how the solution is held in a "Madame Leora's Reading" folder. I suppose this is as good a time as any to point out that in this version, there is no murder (except possibly in the dark pasts of the ghosts). You are trying to figure out which ghost scared who in what room. That's not really as fun as solving a murder, in my opinion, but it will have to do. 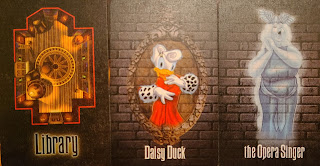 These are examples of the game cards. 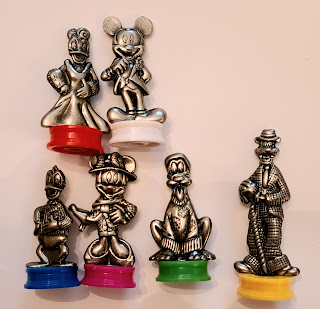 And these are the tokens. They are made of metal, and are what I consider to be "sorta 3D." They are very thin, but have fronts and backs with slightly raised details. 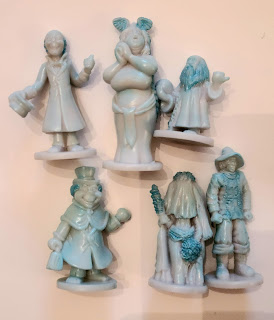 Ah, yes...the ghosts! As you can see, we have the Opera Singer, the Mariner, the Bride, and the three Hitchhiking Ghosts. They are supposed to glow in the dark, but they only barely do.
Game play is pretty fun, mainly because you can pretend that you are walking around the Mansion. This game is still being produced (I think) so getting one isn't difficult at all! There is also a Haunted Mansion Game of Life (which I find ironic), but I don't have it and have never seriously looked at it, so I can't speak to how good it is.
Well, there you go. I think I've gone through ALL of my Disneyland and Walt Disney World games! I think I'll lay off of board games for a while, although in September or so, I might start a new series of spoooooooky games! I have a ton!
Until next time, keep searching for treasure!

The Monorail Game- Version One

Last week I shared my Monorail Game from the early 60's. I decided (after writing that post) that it might be fun to have the original version. So, I checked out eBay and I found a copy that said it was missing the game pieces. Because of that flaw, it was a great price, so I snatched it up!

Now, when you collect board games, you tend to get odds and ends of other games (it's amazing what people just scoop into the boxes when they're putting the games away). So, I have a drawer full of lost dice, markers, pawns, even little buildings. I say all of this to point out that it was pretty easy to replace the missing pieces with ones that, while maybe not exactly like the originals, are period correct and functional.

Let's start with the box top. As you can see, unlike the sleek, midcentury modern look of the second edition, this one is decidedly more like the 1956 games. Of course these attractions didn't open until 1959, so when was this one made? Well, it seems that this version was designed in 1959, and copyrighted in 1960. The art came slightly before the attractions, so it isn't exact, even though the game came out after the attractions. Got it? My head hurts.

The sides of the box are all the same.

Here is the sticker on the back of the board. This art is actually pretty. An interesting aside on the Disneyland logo font: there was an item that someone posted on a Facebook page with this rather different font. As people do on Facebook, everybody jumped in with their two cents about if it was a genuine Disney item or not. Some "experts" swore that Disney never used this font and, therefore, it was a fake. This game begs to differ... 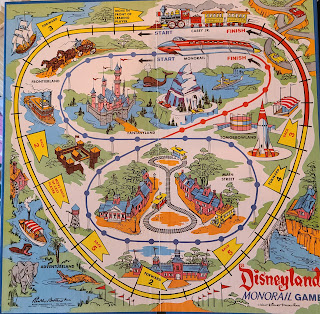 And here is the board. Although I love the simplicity of the Blue Box board, this one is just plain fun! There are a lot more attractions featured, although they don't have the same ones as the second edition. Interestingly, this version makes it clear that what the game refers to as "Casey Jr." is actually the Disneyland Railroad. This seems to be a common mistake. 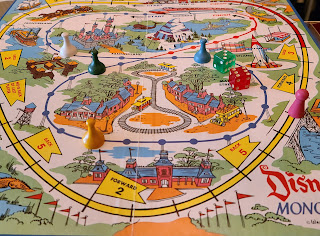 The board with my "new" wooden pieces. The player markers are from a 1950s Clue game; therefore, say "hello" to Col. Mustard, Ms. Peacock, Mr. Green and Mrs. White. The Casey Jr. token is from a large number of multicolored wooden pieces that went to...something else. The red die was actually in this game (there were two), and the green die was from my orphan piece drawer.

Here are the instructions! They are identical to the second version, but written on the inside of the box top.

So now my early Disneyland game collection is complete! I think. There is always the chance that somewhere out there there is a rare, forgotten game just waiting to be discovered!

You know what we call that?

Rails of One Are Lots of Fun!

Well, its getting kind of late here at Disneyland, so I guess we should be heading back to the hotel. But...how? 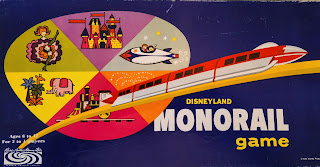 Ta Da! The Disneyland Monorail!
Full disclaimer, this is the second version of the game, released in 1960. It's called "The Blue Box Game" for obvious reasons. The graphics are about as mid-century as you're ever going to find, though, and that alone is worth the price of admission! Interestingly enough, this version actually books for about twice what the original edition does. What does that one look like? Well, we have to wait on Mr. Postman to see... (dramatic forshadowing). 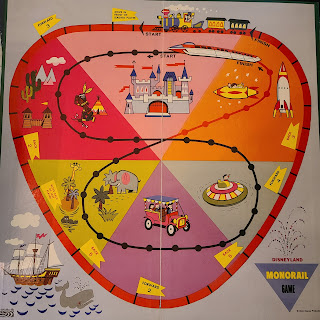 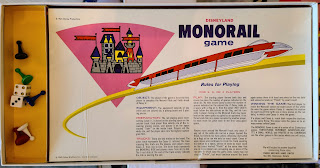 Let's open the box and look at the board, shall we? The minimalist graphics continue inside. I like the triangle Monorail Game logo on the lower right corner of the board.
The instructions are pretty simple. The players race each other AND the Casey Jr. About the most interesting thing about this game is that the Casey Jr. can actually win, which means the players don't! However, game play is very simple and dice motivated. There is no real element of skill, you are simply a passenger hoping to get there the fastest. 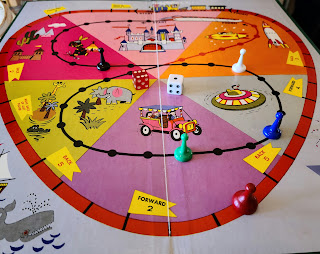 Here is the game set up in all of its glory! The Casey Jr. is the red piece on the outside track is Casey. He moves from black line to black line on the roll of the red die. If he lands on a flag, the player's monorail token does what it says, not Casey. The monorails move on the white die roll. The only wrinkle is that you have to finish on an exact roll, and if you roll too high, you skip your turn.
By the way, when I first opened the game to do this post, I remembered that it had two white die instead of two colors. What did I do? Well, if you read last week's blog, that red die might ring a bell...
And there you have it! I really like the look of this game because it seems to go so well with the "futuristic" monorail theme. However, the original had some pretty good graphics, so....
You'll have to wait and see!
Until next time, keep searching for treasure! 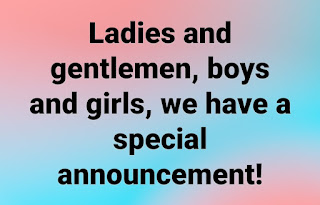 No running and pushing, please! Princesses and children first! Thank you for your cooperation.

Yes, since I was doing this series I decided to look on eBay to see if I could find a vintage Fantasyland game. There are a lot of reissues, but original 1956 versions are tougher to come by. I had two criteria: 1. Vintage 2. Cheap. And I found one for 10 bucks!

So let's delve into this gem that I, admittedly, have not played yet.

This is the actual box top. As you can see there is a comet shaped tear above the castle and some other scuffs. Still, you can see that the graphics are all above and beyond! What kid wouldn't want to dig right into this game?

As you can see by the above pictures, this box is unique in that each side has different graphics. No other Disneyland game had this feature. They did a great job with them too!

This is actually the graphic on the back of the game board. Just like all the rest of the games, it is reproduced on a sticker there. Let's open this thing up! 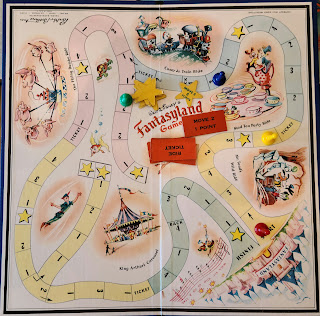 Ok, I admit that I originally felt a little let down by the graphics and layout of the actual board. Things look like they are randomly tossed around and there is a LOT of white (pink?) space. Still, the illustrations that are there are nice. I think the graphic rich box set some high expectations. Still, I think it grows on you. 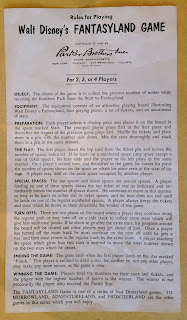 Here are the rules. As you can read, this game is interesting in that there are no dice and there is no spinner. Instead, you have tickets, stars, and the board spaces themselves to motivate the pieces around the track. Also, its interesting that while the first player that reaches the finish ends the game, they may not be the winner. The winner is the player that collects the most stars, regardless of where they are on the board when the game ends. There are even "turn off tracks" that will allow you to collect more stars. 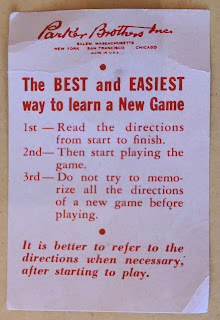 Ok, this is just cool. I have never seen this little slip of paper in any of my other Disneyland games, but it probably came in all the Parker Brothers games. I'm sure it was usually immediately lost, or even purposely thrown away. 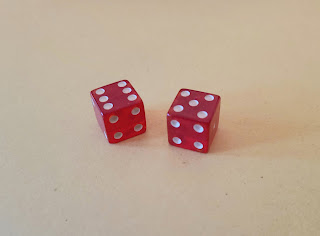 Sometimes when you get used games, you get bits and pieces of other games. These dice, although not needed, were bagged up with the rest of the parts. Either the previous players decided that dice were easier to use to move, or the pieces just got thrown in on accident. Either way, I have a bonus set of dice!

So there you have it! I'm not sure when I'll actually sit down with my wife and give this one a go. Maybe we can team up with Sue and her hubby and have that game night! Everybody is invited!

Anyway, sometimes the treasure in something is just finishing your collection after about 20 years.