Welcome back to the attic! Come on up! Don't worry, this attic has central air conditioning...

In 1968 Mattel released a line of die-cast cars that took the toy world by storm. The sixteen cars were customs, race cars, and show cars. They came in at least eight "spectra-flame" candy colors. The really big deal though....was their wheels.

Mattel's cars fearured a new invention. They had a piano wire and bearing wheel system that not only made the cars roll much faster, but also gave them a suspension. Added to the California Custom vibe of the designs, they were unstoppable! They called them "Hot Wheels."


Well there you go! In the next few weeks I will feature more cars. Until next time, keep searching for treasure!
Posted by stu29573 at 3:12 PM No comments:

When I was a kid, I got a really cool item at Six Flags Over Texas that I never could find again...until a couple of weeks ago. The item is this: 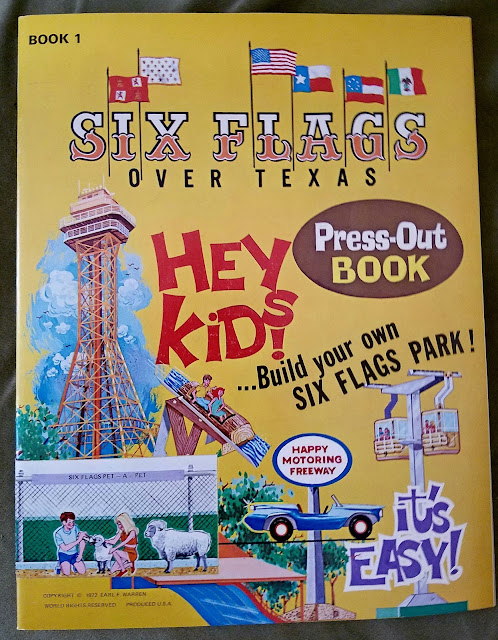 Yep, you could actually build your own Six Flags! I remember sitting on the living room floor and sliding my paper log down the paper flume in the shadow of my paper tower. Very cool stuff!

I found this unpunched book on eBay and sent the seller a note telling them that I was excited to find it. As it turned out, I was in for another surprise. The guy selling these is the guy that actually originally printed them for Six Flags! He also told me why they are almost impossible to find.

The year was 1972. Earl Warren came up with a great product, a build it yourself amusement park! What kid wouldn't want that? He printed up 5000 of them and they began selling them in the park...and then tragedy struck. Well, maybe what happened wasn't a tragedy, but it stunk pretty bad. You see, one of the attractions featured was the Enco Happy Motoring Freeway (a ride where you drove little cars around a little highway, like the Disneyland Autopia). The problem was that Enco chose 1972 to become...Exxon. In one fell swoop, the books no longer represented a major sponsor. Out of 5000 books, only about 1000 were sold. It was never reprinted. As a kid, I was in the right place at the right time!

44 years later, I was in the right place again. A chance search for "Six Flags Punch Out" yielded the long forgotten book. As it turns out, Mr. Warren is a very nice guy who also included this: 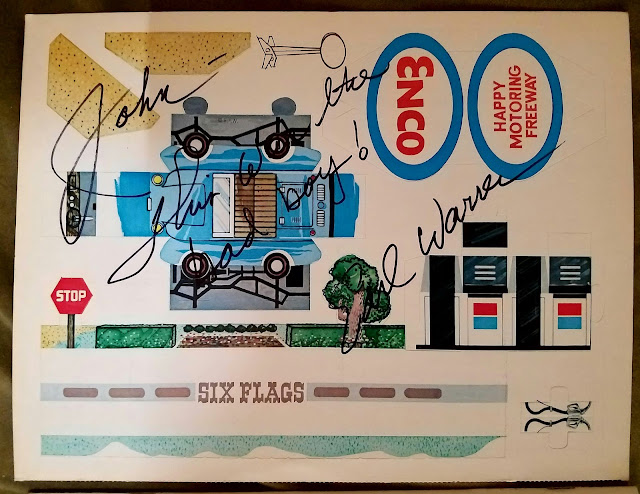 In case you can't read it, it says "John- This was the bad boy! Earl Warren" At least he can laugh about it now! Speaking of laughing, Mr. Warren still lives in Arlington where he is the leader of a clown organization. He seems like a really interesting guy!

If you would like your own copy, he still has a few. They are very reasonably priced, so I would jump on it quickly (oh, wait, I already did, lol!)

By the way, here are the other pages: 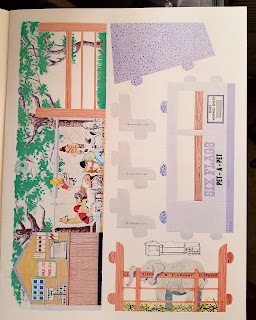 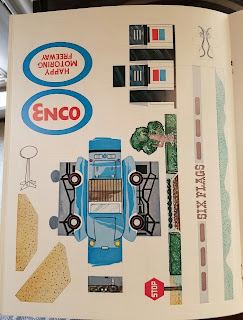 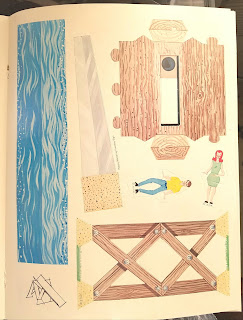 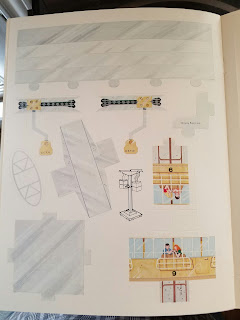 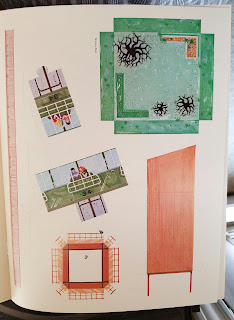 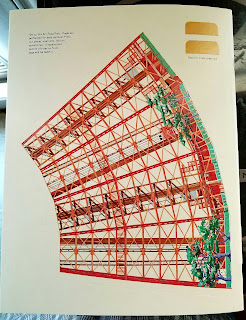 Howdy campers! On this steamy Texas summer day, I'd like to take you back to a place and time that lives in a special place in a lot of people's hearts. Today we're going to look at an item from one of the best theme parks ever created. Disneyland, perhaps? Nope, campers, today we are going to look at the original Six Flags Over Texas!

Now, if all you know of 6FoT is what the current amusement park consists of, you probably think I'm nuts. The current park is just a mashup of giant steel thrill machines and absolutely no connecting theme. Today's park is, in short, horrible.

But there was a time when it held real magic and adventure. In the late 1960's and early 1970's, when the park was young, it was wonderfully themed to Texas history. It had six "lands," much like Disneyland, but these areas were devoted to different flags that had flown over the land during it's long history. In addition, each land had attractions that were meticulously themed to that time period, and was staffed by castmembers in period garb. There were historical reenactments, and original rides that rivaled anything at Disneyland at the time. Just ask anyone who knew this place about La Salle's River Boats, The Spee-Lunkers Cave, or Skull Island, and you will see their eyes mist over with longing...

Our item today comes from a shop just off of Skull Island. It is this: 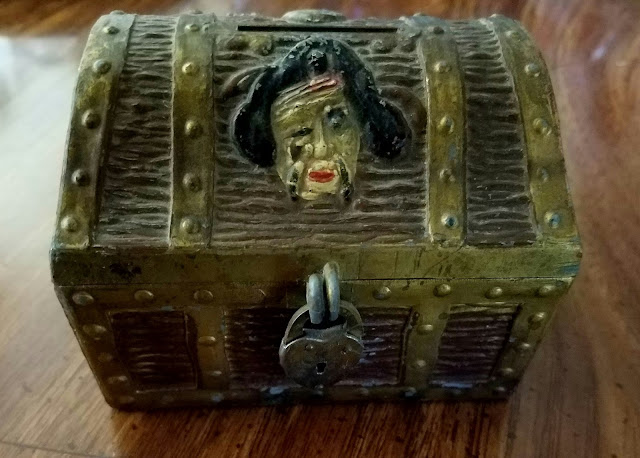 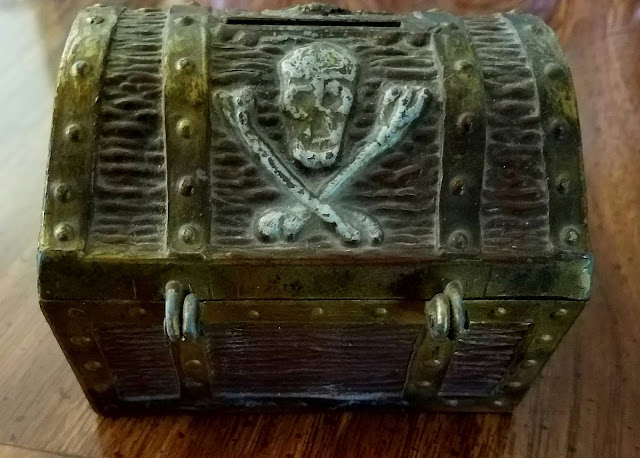 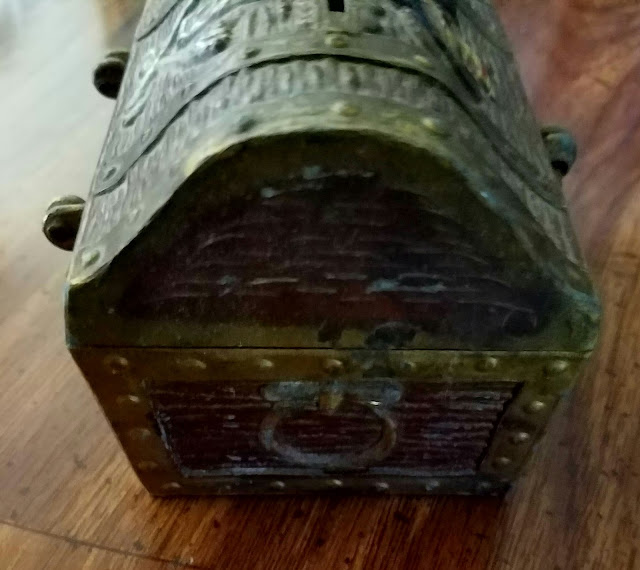 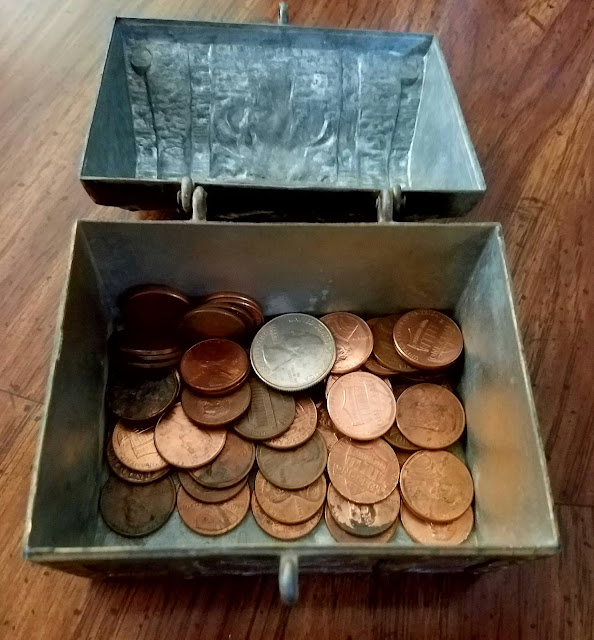 It's a pirate's treasure chest bank! This bank is made out of pot-metal and seems to be hand painted. This must have been a popular item, since I knew several kids that had one. It's not marked "Six Flags Over Texas," and, in fact wasn't a park exclusive. I believe it was made by a company in Chicago. Still, it reminds me of those wonderful pre-Warner Brothers days at the best theme park I ever went to as a kid. R.I.P. Six Flags Over Texas, you are greatly missed.

By the way, here are some shots of the park during that time that I found on the interwebs. I'll give credit to those I know...