Hello attic explorers! This week I'm featuring a toy that brings back fond childhood memories. In 1970 Tonka came out with a line of cars that were smaller than the typical Tonka truck. Instead of measuring in at the typical 8-12 inches (or more) these cars were closer to four inches long. The "Tiny Crazy A" line all featured the same body, with different paint, wheels, and tops. As a kid, I had this one... 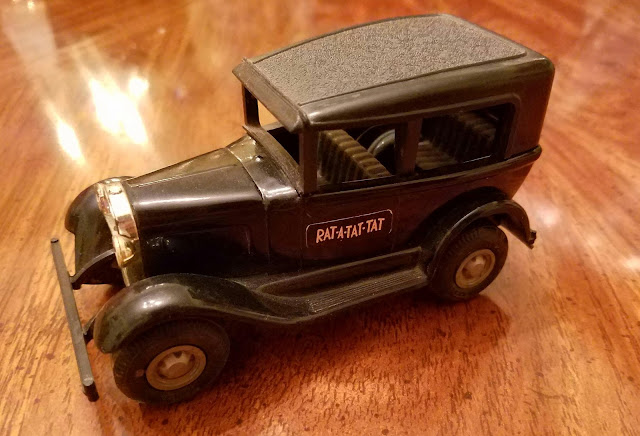 This is the Tiny Crazy A's Rat-A-Tat-Tat! It is obviously based on a 1930's gangster car, and as such is pretty much a black, straight stock 1930's Model A. Sometimes less is more, and that seems to be the case here. I just love the look of this car!

I can remember that mine had plenty of adventures holding up banks and escaping as imaginary machine guns blazed! Elliot Ness could never catch me!

Years later I found this in an antique mall... 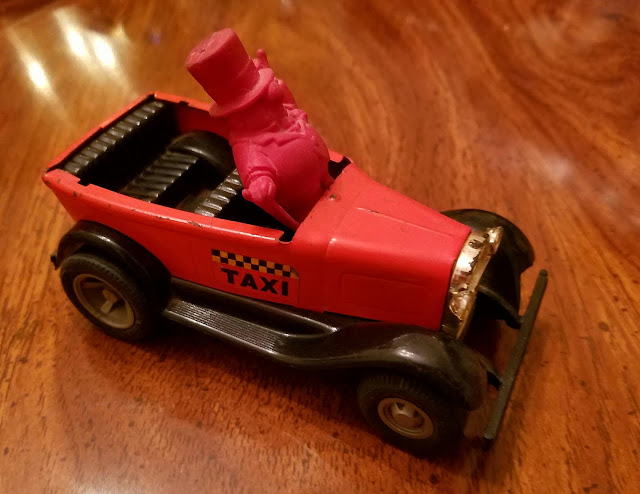 Yep, it's the Crazy A's Tiny Taxi! As you can see, it's missing the roof (which is pretty typical) so I turned it into a touring car for my W.C. Fritos eraser....because....who wouldn't?

The car is identical to the Rat-A-Tat-Tat, except for the paint, stickers and rear wheels. The top would be the same if I had it.

These are really cool little cars that now sit proudly on my bookcase. I dust them every now and then and once in a great while, an imaginary bank may suddenly be short some deposits.... I think the eraser did it.

Until next time, keep searching for treasure!
Posted by stu29573 at 5:39 PM No comments:

Sizzlers were Hot Wheels' "next generation" vehicles. With the help of tiny nicad batteries, these Hot Wheel sized cars could zoom around a track without the aid of a hill or a Super Charger. They were blisteringly fast, and just a whole lot of fun!

One problem with their speed was that they tended to fly off of the typical orange strip Hot Wheels track. They sold Sizzlers sets with "brake sections" so slow them down before they hit the turns, but these were only partly successful. Then they came out with the wide, black Fat Track, which featured big banked turns. These sets were probably the most successful.

Still, there was another catagory of set that was pretty cool. It was made of vacuum formed plastic that allowed for mountains and lakes to be featured, which added a measure of realism not seen with the orange or Fat Tracks. In 1973 they released the Road Chase Set based on this format. I happen to have one, so I'll share some pictures with you!


All in all this seems like a very fun set. I say "seems like" because I've never run live cars over it. The reason is simple. The vacu-formed plastic is FRAGILE, and in 44 years has only gotten more so!  I get nervous just setting it up. Still, I might have to try out a few laps some day.... It just looks too fun not to!

This week we are going to look at a Hot Wheel related item from 1968 that isn't a car (we already looked at all of those!) It's the Hot Wheels Wipe-Out Race Game! It looks something like this:

I got this game years ago at a local toy show. I didn't pay much for it at the time, mainly because the guy manning the booth had been ditched by the owner for a few hours and he got his revenge by selling me this game for something like ten bucks. Moral: take care of your employees!

Anyway, even though I bought it because it was a nice vintage tie-in piece, as it turns out, it's actually a pretty cool game. Let's pop the lid off and look inside, shall we?

The game is simple enough; just be the first to get around the track! There is a good combination of strategy and luck, though, so it can actually be an entertaining game! All in all, not a bad find for ten bucks!