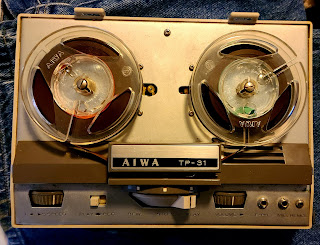 A while back I went to an auction that had a little bit of everything. On a table, I spotted a little reel to reel recorder. Now, I had one of these as a kid, and nostalgia soon had me itching to bid! (Not literally, that would be weird)

As the lots came and went, I kept my eye on my little recorder. It hadn't seemed to draw much attention, so that was good. Of course, there was no way to tell if it actually worked, so that may have been chasing people off.

The lot came up and opened at five bucks. I raised my hand and then the price shot up to...well, five bucks. No one else bid. For better or worse, it was mine. Of course for five bucks, what could go wrong?

Well, long story short, it actually does work! The included tape is some kid (in the 70s, I guess) trying to be a rock star. I've never really used it, other than testing it, but it's nice to have.

So there you go! Be careful what you bid on, you just might get it.