Due to statewide academic testing, there will be no post this week. Thank you for understanding...
Posted by stu29573 at 7:28 PM No comments:

A few years ago I picked up an item that has me still confused. This is it: 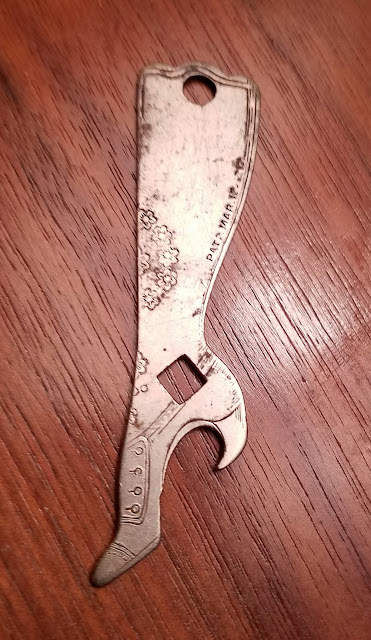 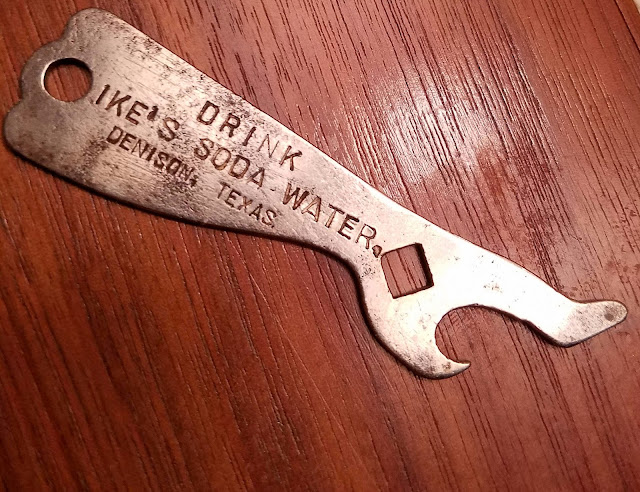 Now, what has me confused isn't what it is (it's a bottle opener) but what its back story could be.

That's about it. Let's look at what we know to discover what we don't.

Yes, it's from Denison, but from when? I don't think it's as old as it looks. By the style of shoe, it would seem to be from the early 1900's, but the "Ike's Soda Water" wouldn't make sense then. Denison's most famous son wouldn't be famous until a half century later.

And what about "Ike's Soda Water?" As far as I can find, there never was such a product. Or if there was, it was a tiny company. And by the time Ike was big, not many people would have called it "soda water." "Soda", "pop", or "cold drink" would haven all been in more common use then. And about that patent date...I'm not sure it matters. The opener could have been patented at an early date, and then made much later.

So, here is what I think...In 1973, Denison Texas had its centennial celebration. I think this could be an item produced to celebrate that event. I have seen one more, at Main Street Mall in Denison, which had a small pen knife attatched to it (I told you I would get back to that). It was in better shape and didn't seem quite so old. So, case closed!

Except that it isn't, of course. I could be completely wrong! If anybody out there can shed some light on the subject, please do.

Disney Mystery No Lighter After 10 Years....

About ten years ago I happened upon a lighter in an antique shop in Denison, Tx. I don't collect lighters, and I would have completely overlooked it if it hadn't been marked thusly: 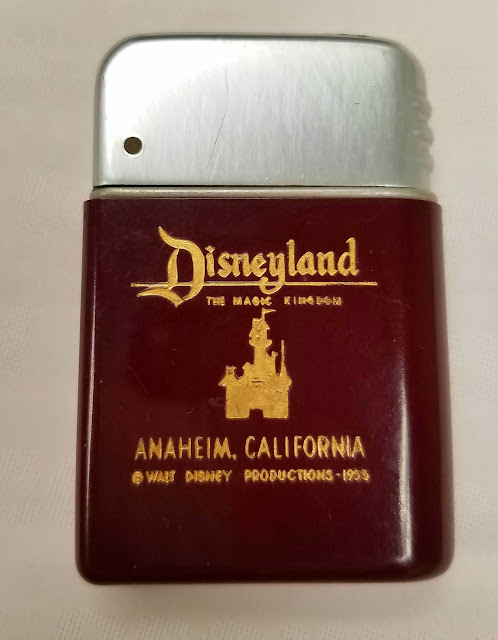 As you can see, this seems to be an item produced for Disneyland in it's first year of operation (1955). I didn't snatch it up right away, but after thinking about it a while, I went back and purchased it.

Now, usually the first thing I do when I buy something that I haven't seen before is to go to the Great and Powerful Google to see what I can find. I did, and I found...nothing. I then went to Ebay and other auction sites....also, nothing. Hmmmmm.

I kept trying and kept failing. Finally, I got to the point where I emailed the leading authority on all things Disney, Dave Smith.

He had never seen it before.

He suggested that it might be a knockoff, sold outside the gates in the first few years of the park. A couple of things support this idea. First, the plastic certainly seems of the right age, but the lighter is rather poorly and cheaply made. Also, the addition of a date on the copyright seems odd, since most merchandise was simply marked "Walt Disney Productions" with no date. Thirdly, we know that such items being sold on the cheap right outside the park drove Walt a little nuts and that fact, along with the development springing up around Disneyland, prompted him to look for a place with "the luxury of size."

So there you have it. It seems I have a piece of Disneyland history that might have, in a very small way, inspired Walt Disney World!