The First Man to Orbit the Backyard

The mid 1960s was a prime time for iconic toys. Last week's entry was certainly one, as is this week's. Throughout the 60s, the United States was locked in a massive space race with the Soviet Union. The Soviets were winning at first, but like the 1980 Miracle on Ice, in the end, the winner was the good ol' U.S.A.!

The U.S. manned space program went through three phases- Project Mercury, Project Gemini, and Project Apollo. Hasbro's space program had one phase...sort of a cross between Mercury and Gemini. They outfitted their best man, G.I. Joe to take on the awesome responsibility.

The G.I. Joe Space Capsule is as iconic as a 60s toy can get. I got one for Christmas in 1967! That one left me many mom-generated garage sales ago, but thanks to eBay, I got a new one in pretty good (but not perfect) shape! Here she is! 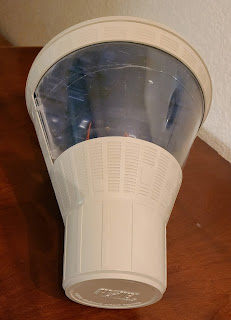 Looking straight at the beast. This thing is big! Something you realise when you think that the guy that fits it in is 12 inches tall! 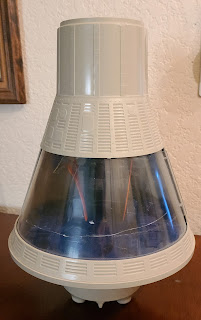 Looking at the side, you can see one flaw. The sliding plastic hatch has a pretty good crack in it. It must have been hit by space debris. Still, it works fine. 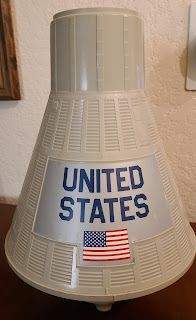 The proud "United States" sticker on the other side. 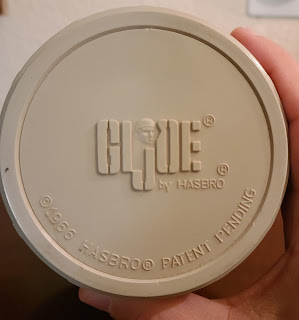 The nose is a great place for all of the legal info. Plus, it just looks cool. 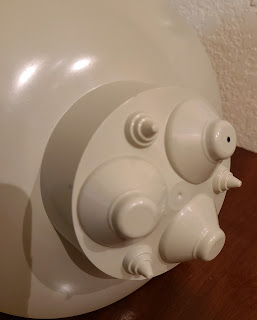 The retro rockets on the back. 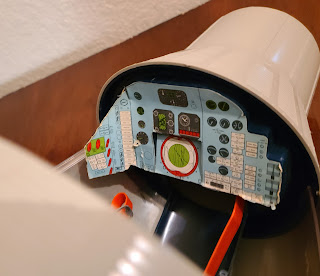 The control panel. If it looks like it's been wet, it probably has. You see, these floated to simulate a slashdown. The one I actually had as a kid didn't float because I dropped it on the hard floor and knocked a hole in one of those retro rockets. 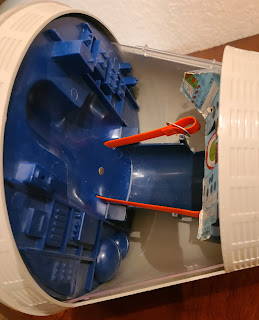 Joe's couch doesn't look too comfortable. There are also supposed to be two handles that he could hold onto, but these are missing. Still, it's not too bad. You can tell this is an original release because of all of the blue plastic. Later releases were molded in pale green glow-in-the-dark plastic. 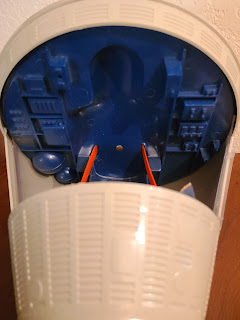 Another view of the dials and fiddly-bits. That's a technical term. Really.
I say this is an iconic toy because just about every guy in their late 50s to mid 60s seems to have either had one, or knew someone who had one. Really, other that the "more Gemini-like" large hatch, it's a pretty good copy of a Mercury capsule. And, as I mentioned before, its rather large and heavy, standing almost 14 inches tall and over 9 inches in diameter. Great attributes for a toy!
I keep meaning to get a period correct "Joe" and space suit to go with it, but I haven't found exactly what I'm looking for yet. Someday!
I was going to include a picture of me in 1967 opening gifts with the capsule sitting beside me, but for the life of me I can't find the photo album. Check back, though, because when I find it, I'll add it. I was a darn cute kid!
EDIT: I FOUND IT! 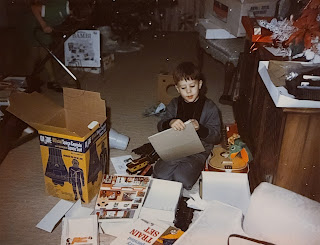 Here I am at age 5 opening up my really cool Christmas presents at my grandparents' house! It's a really good picture of the space capsule box! The capsule is peaking out from behind the box. I have the Marx train set. I have no idea what I'm opening... 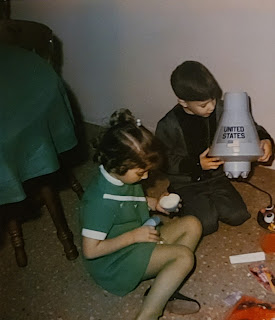 Here's a better view! That's also my Incredible Edible machine on the right. They tasted like erasers. They were wonderful! That's also my cousin who is five months older than me. I never let her forget that.
So there you have it! Until next time, keep searching for treasure!

Apparently Blogger doesn't like people commenting from anything but a computer. I'm trying to find a solution, but so far no luck. If your comment doesn't go through, please try from a computer. Thanks.